Landing back in New York from SxSw, I keep hearing Rodney Brooks in my head tell a vividly anxious crowd to calm down as the robotic Judgement Day is way off (maybe by 50 years ). While agreeing that media driven tech-hysteria is unproductive, I do think we should be responsive in enacting barriers to prevent misuse, by the likes of the Trumps of the world, in building armies of killer robots with superior AIs that have the ability to overtake our networks. Is it possible? Well, yes, here are some highlights from this week’s robotic news to illustrate how the sensational is happening before our eyes.

Earlier this week Stanford’s Biomimetics and Dexterous Manipulation Lab announced the development of a SCAMP robot (Stanford Climbing and Aerial Maneuvering Platform). SCAMP is the first robot to combine flying, perching with passive attachment technology, and climbing. It can also recover from climbing failures, as well as take off when it’s ready to fly again. It does all of this outdoors, using only onboard sensing and computation, leveraging lessons from previous climbing robots and mother nature (see video below).

SCAMP is the evolution of earlier climbing robots, such as the gecko inspired Stickybot I & II, as well as climbing robot Spinybot and RiSE.  As we featured back in 2011, Stickybot, a 9-gram robot that is capable of pulling 100 times its body weight vertically up a wall, which was made possible by using a compact, powerful servo and alternating loads between two feet which move on simple, one-dimensional trajectories. In addition to using its microspine to climb, its legs are also reminiscent of many climbing insects, from daddy longlegs to the praying mantis.

The Stanford researchers used natural analogs for SCAMP, inspired by animals that are inherently multi-modal,from flying squirrels to woodpeckers, who alternate between flying, perching, and climbing to optimize their arboreal locomotion strategy. Besides being a good climber, SCAMP is inspired by mother nature’s “aerodynamic forces” to enable it to to perch. Its quadrotors (like a backwards drone) actively press the robot into the wall with the microspines turning the rotors on and off to climb and stay constant in a perch position.

“We see SCAMP as the starting place for an entire family of perching and climbing robots of varying scales and attachment strategies. The lessons we learned from SCAMP should allow us to tackle new surfaces, new environments, and different quadrotor platforms with new sensing and communication abilities.  In the meantime, SCAMP will continue doing its best to defy gravity and go up without coming down,” said the researchers in their IEEE paper.

Looking to the insect world for inspiration is not new; other researchers at Stanford’s Biomimetic Dexterous Manipulation Laboratory over the past few months have made a number of strides in developing miniaturized robots designed to mimic the strength of ants. Recently, Stanford researchers unveiled a new video showcasing the capabilities of a mini-robot dubbed the μTug. Weighing in at less than 20 milligrams (~17 grams to be exact), each microbot is able to carry objects that weigh more than 2000 times its own weight. And when you put a team of these microbots together, they can accomplish the seemingly impossible, such as being able to pull a car, albeit slowly. 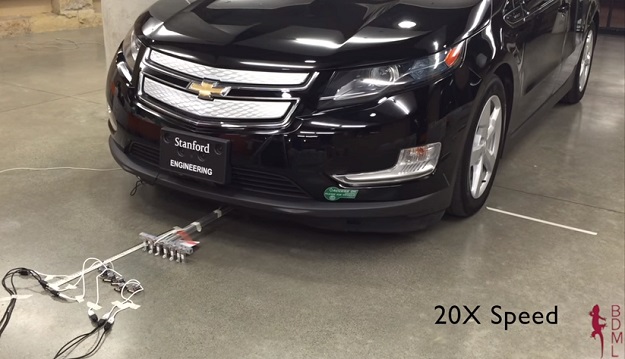 Similar to SCAMP, the uTug uses a special adhesive inspired by gecko toes that enable our micro robots to move objects more than 2000 times their own weight. Therefore a team of 6 microbots, which together weigh less than 100 grams, can successfully pull a 3900 pound car on a polished concrete surface.

3. The Power of the Collective

Talking of team work, SRI International introduced their MicroFactory platform, which uses hundreds of tiny robots (each one smaller than a dime) to build macro-scale structures, like trusses, and can even contain integrated electronics (like Transformers?). Such complex manufacturing requires cooperation between many different micro robots, each one outfitted to perform a specific task.

While we are far from the Borg, as SRI’s micro robots today are small magnets with the intelligence built into the substrate that they travel on. Printed circuit boards drive them along electromagnetically, with the ability to control their speed and movement in two axes as well as rotationally. SRI has been working with their micro-bots since 2014, but now they are experimenting with ways of adapting standardized micro robots into customized platforms designed for specific tasks by fabricating tools for them, which will be much more  efficient with more complicated applications.

Utilizing the collective intelligence and abilities of the platform, micro robots join together to now construct their own tools. This can be done on a single micro robot, or an array of micro robots that’ve been formed into a larger manipulator. It’s best to think of the SRI as another additive manufacturing process, similar to 3D printing, essentially small bits of materials come together to create something useful. All of this takes place in an area of just a few square inches of space, and it vastly increases the utility of all robots to change shapes and rebuild themselves depending on the environmental conditions.

Eventually, the MicroFactory technology could expand outside of manufacturing, and achieve integration with other robotic systems: imagine micro robots “living” inside larger robots, monitoring them and performing maintenance and repairs.

Now that the micro robots can make their own tools, the same fleet of robots can be reconfigured to make different kinds of things. SRI has been focused on constructing strong, lightweight carbon fiber trusses with its MicroFactory, but they’ve recently started developing ways to make skins. Laying skins on top of arrays of trusses creates sandwich panels, which are a lightweight and very stiff structural component commonly used to make durable walls and roofs (examples of this new construction will be available later this year. Could a microbot eventually colonize to form a superbot?

When I was involved with the use of video in the early days of the Internet, pre-Amazon and Google, Paul Kagan used to preach that one day we will be able to order pizza from our televisions.  While the seamless replaced interactive TV remote controls, we are seeing deja vu with Dominos new robotic Delivery Robotic Unit (DRU).  This autonomous terrestrial vehicle was built in collaboration with Australian technology startup Marathon Targets.

DRU is still in the prototype stage, but that doesn’t mean that it hasn’t been busy. Dominos worked with the Australian Queensland Department of Transport and Main Roads to ensure it met all the requirements to be set loose on the streets. It uses LIDAR, the same technology utilized by self-driving cars, to identify the surrounding environment and has built-in GPS tracking technology that syncs with Google Maps. It’s actually very similar to Starship Technologies’ eponymous delivery robots, which will soon hit the streets of London (see our earlier post). Although DRU will initially be tested in Australia, Dominos says it’s working with “global partners” to ensure the delivery droid meets the necessary requirements to be tested on roads and footpaths. Vehicles will start appearing in stores within the next six months, but it could take up to two years for pizza delivery shuttles to become a regular sight on the streets. Dominos for years has been trying to deliver the freshest hottest pizza within 20 minutes of ordering, could the DRU be its biggest secret sauce, and could Pizza be a warning signal of what’s to come?

Maybe some one should tell Spicoli…

This site uses Akismet to reduce spam. Learn how your comment data is processed.