Everyone wants superpowers, but only a few are born with extraordinary abilities.  Usain Bolt’s speed (as indicated by his last name) is as close as we have to going as fast as a cheetah.  Well, that was true up until this week.  Now researchers at MIT have built a robotic cheetah that outpaces even the olympic sprinter.

While the robot is far from beating its mammal cousin, it does squash Bolt’s worldrecords. Show on the MIT lawn, the the robotic cheetah can reach a speed of 16 Km/h in a few seconds, where as its wild counterpart can reach 94 Km/h in matter of seconds. But this four legged metallic beast has the capability of reaching a maximum speed of 48 Km/h in less than a minute, surpassing Usain Bolt whose maximum speed is a world record 44.72 Km/h. 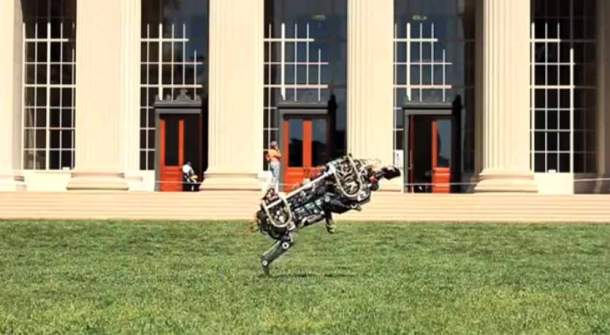 According to MIT News, the 70 pound robot cheetah is controlled using an algorithm, which calculates the amount of pressure needed for the legs during each impact with the ground. As the algorithm controls the force of the robotic cheetah the researchers can speed up its movement in phases.

Sangbae Kim, an associate professor of mechanical engineering at MIT, said “Many sprinters, like Usain Bolt, don’t cycle their legs really fast. They actually increase their stride length by pushing downward harder and increasing their ground force, so they can fly more while keeping the same frequency.”

As the force based movement gives more control to the cheetah, it can accelerate even in difficult terrains and jump obstacles, which are not more than 30 cm tall.

One of the more cheetah like abilities of the robot is its stealth. The four legs of the cheetah robot is pushed forward by battery powered electric motors reducing sound where as other robots use gasoline engines for movement. This is a major advantage over Boston Dynamics’ quadrupeds.

Kim added “Our robot can be [as] silent and as efficient as animals. The only things you hear are the feet hitting the ground. This is kind of a new paradigm where we’re controlling force in a highly dynamic situation. Any legged robot should be able to do this in the future.”

Kim and his colleagues in MIT will present the details about the bounding algorithm during the IEEE/RSJ International Conference on Intelligent Robots and Systems in Chicago.  In the meantime, KIm’s team has received DARPA funding for the research which means that one day soon this robotic cat could eventually take a bite out of the snake of ISIS.

This site uses Akismet to reduce spam. Learn how your comment data is processed.